This just in!!! The Grand Jury heard testimony from LSU football players and Quarterback Jordan Jefferson today and had just handed down a verdict.

WWL out of New Orleans is reporting that the Grand Jury has indicted Jefferson on Simple Battery charges while Joshua Johns was not indicted. Here is the story Courtesy of WWL. 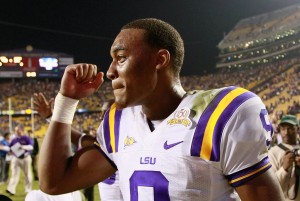 A grand jury has indicted LSU quarterback Jordan Jefferson on simple battery charges, a misdemeanor and a lesser charge than the maximum charge he could have faced.

The grand jury did not indict Joshua Johns.

Jefferson and Johns, a reserve linebacker, were originally arrested and booked with second-degree battery in the Aug. 19 fight, after which four men sought treatment at hospitals.

Jefferson testified a week after the grand jury heard testimony from witnesses to the incident that occurred outside of a Baton Rouge bar in August.

Jefferson was accused of kicking one of the victims. He was suspended by LSU and hasn’t played this season after it was expected that he would be the team’s starting quarterback.

Head Coach Les miles is suppose to address the indictment topic on his weekly radio show tonight.  We will keep you updated!!